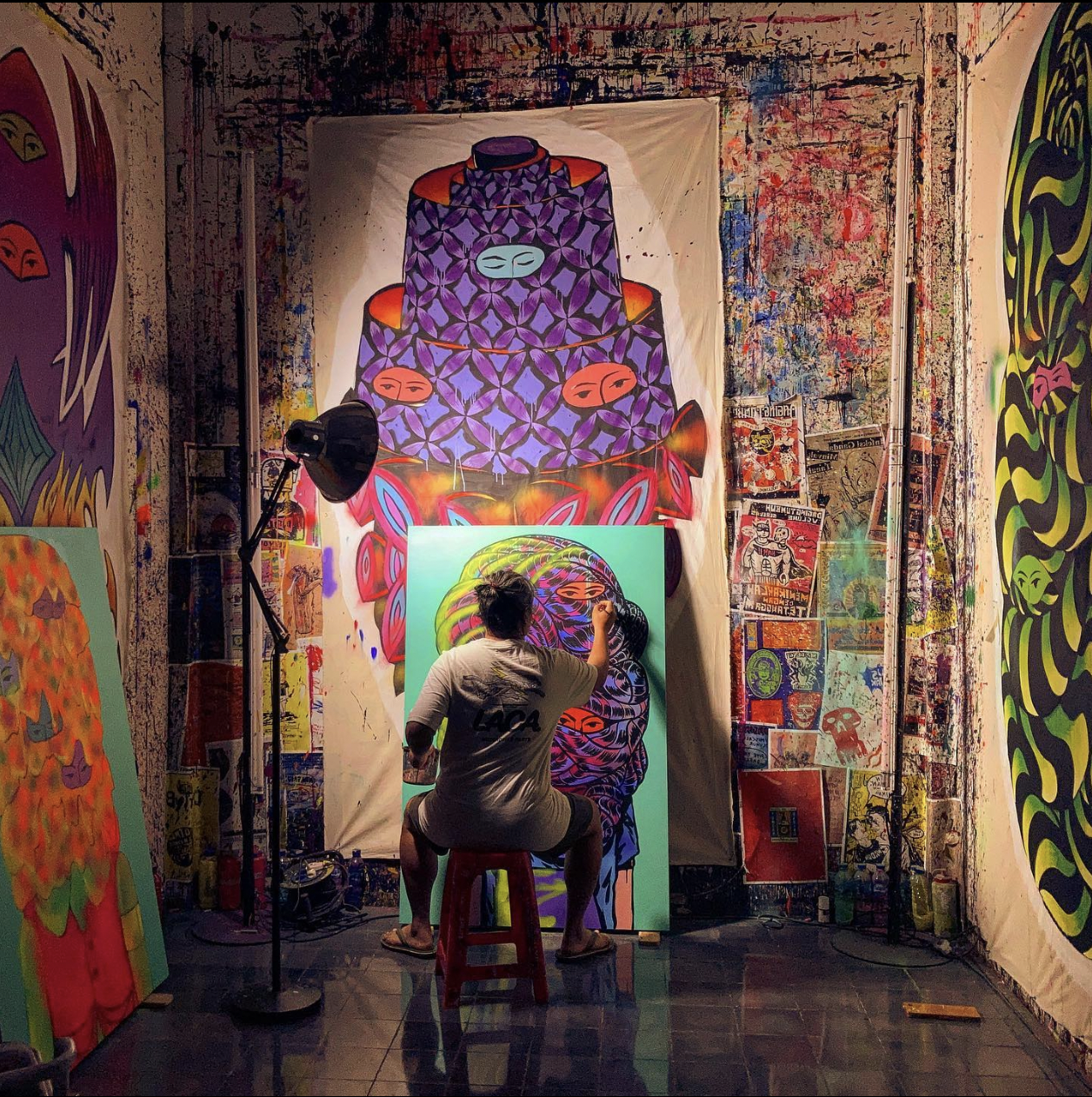 Born in 1977, Eko Nugroho is one of the most active Indonesian artists on the contemporary art scene. His work was first exhibited in 2008 at the National Museum of Singapore and has since been shown in prestigious international institutions and events in solo and group exhibitions.
The artist was 20 years old when in 1998, the autocratic regime of President Suharto, in place for 32 years, fell, overthrown by student demonstrations during violent riots. Eko Nugroho is part of the generation of artists who made their debut during this period of democratic transition and tried various practices in a context of brutal liberation of speech.
His work follows a multidisciplinary approach from the start: drawings, paintings, sculptures, installations, interventions in public space. In doing so, he revisits many Indonesian artistic traditions (batik, embroidery, shadow theater) while introducing other modes of creation, those of the contemporary counterculture: comics, fanzine, street art, animation.
A cast of hybrid aliens and UFOs have thus populated Eko Nugroho's imagery since the early years of his career. These symbolic figures, part-man, part-machine, part-animal, give him the opportunity to explore the often absurd condition of humans in contemporary societies and to trigger further questions with far greater implications than is immediately apparent.
Like most Yogyakarta artists, his work is heavily imbued with socio-political content. Whether democracy, religion, urbanism or ecology, his works are at the same time very critical and full of humor and exuberance, as can be seen in the titles given by the artist to his works: Happy To Be Alienated, Yes We Concern About Nothing, or We Are Complaining About a Future That Doesn't Exist.
In this universe, there are no easy answers, no grand narratives, good and evil, right or wrong. Eko Nugroho's work holds up a mirror to us all, encouraging us to contemplate the gray areas we face in our daily lives, the limits of our understanding (and misunderstanding) of the world and ourselves.
If the playful and colorful images are easy to access, inviting us to take an imaginary leap into the artist's strange world, the layers of ambiguity and absurdity they present give them a dimension that is both singular and universal, and open up an infinite number of levels of reading. "Where we expected exoticism, we are confronted with our own pluri-identity. What moves Eko is not the modernist or postmodernist dynamics of contemporary art, but the need to create an enchanted link in a fragmented world" (Sébastien Gokalp, curator of the exhibition Hybrid Witness, Musée d'art moderne, Paris, 2012) Eko Nugroho was born in 1977 in Indonesia. He graduated from the Indonesian Art Institute in Yogyakarta in 2006 and exhibited at the National Museum of Singapore in 2008. His work has been shown internationally in group and solo exhibitions: Contemporary Arts Centre in New Orleans (2008), Lyon Biennale (2009), MOCA Shanghai (2010), ZKM Karlsruhe (2011), National Gallery of Victoria in Melbourne (2011), Musée d'art moderne in Paris (2012), Venice Biennale (2013), Kunstverein in Frankfurt (2015) and M+ in Hong Kong (2018). His works are present in numerous public and private collections in Asia, Europe, America and Oceania. He lives and works in Yogyakarta. 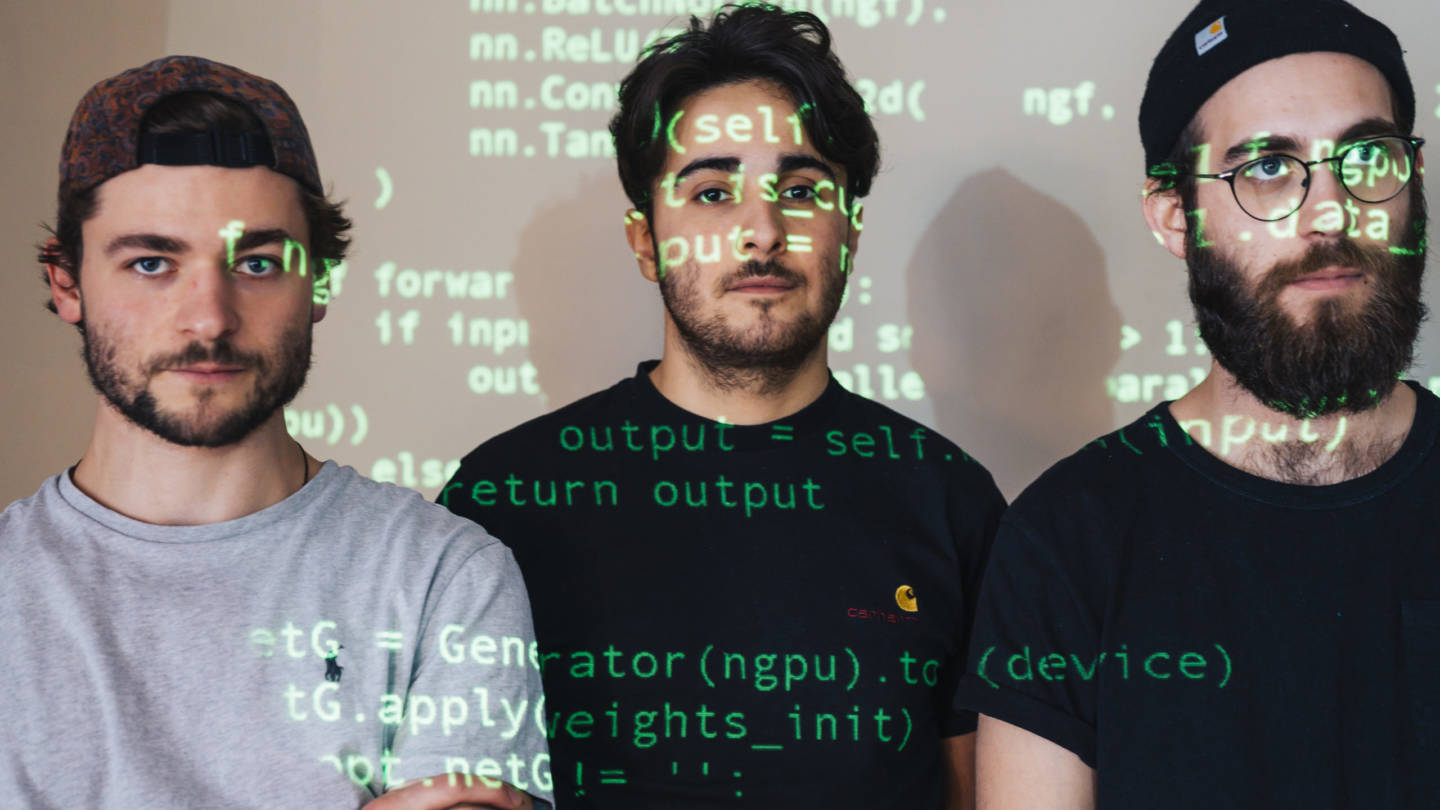 Obvious is a French collective of artists and researchers who use algorithms to create art. Their work focuses on the new tools available in the field of artificial intelligence and how they can be used for artistic purposes, playing with the uncertainty inherent in new technologies and proposing diverted applications that go further than a simple request to existing data. Pioneers of digital art, they are also the first French artists to have created NFTs as early as 2018 with the piece Eryn Nemesis. Their works fall at the crossroads of science, history and art.
Whereas their predecessors used brushes, charcoal, hammers or chisels, Obvious shapes their works using computer tools that they adapt to their research object. Each of their works is the result of a long time research and a repeated dialogue with the machine. A process of to-and-fro and interaction with algorithms which, after a detour through the digital world and the production of AI generated artworks and NFTs, ultimately returns to the physical world with the creation of hand-made artworks (paintings, prints, objects). In a reference to this creative process associating the man with the machine, the collective has chosen to sign its works with the mathematical formula of the algorithms it uses.
Beyond this unique exploration of the man-machine creation language, two key elements characterize Obvious' approach: on the one hand, the will to seize art history as a material to be used and reinterpreted, whether it be the classical portrait (Belamy's Family series, 2018), the Japanese print (Electric Dreams of Ukyo series, 2019) or the African mask (Facets of AGI series, 2020); on the other hand, the specific care given to the construction of highly documented and often sophisticated fictional contexts, which will serve as backgrounds for each of their series.
Obvious' works are conceptual propositions that must therefore be understood beyond their purely visual dimension, as part of an overall experimental work process and as components of a wider fiction in which each piece has its own particular place. In 2022, Obvious delivers its interpretation of the Seven Wonders of the Ancient World, human achievements that still haunt our collective unconscious today even though most of them, with the exception of the Great Pyramid of Giza in Egypt, have not survived the passing of time. All that remains of these wonders are historical texts written by geographers, historians and writers, a fertile ground that has fostered the imagination of many artists and illustrators and gives Obvious the opportunity to engage in a dialogue with the classical artists who preceded them in the treatment of this theme.
Obvious is a French collective of artists and researchers composed of Hugo Caselles-Dupré (1993), Pierre Fautrel (1993) and Gauthier Vernier (1993). Their work has been presented in numerous institutions: National Art Museum of China (Beijing, 2019), King Fahd Cultural Centre (Ryad, 2019), Hermitage Museum (Saint Petersburg, 2019), Haus der Kunst (Munich, 2020), Cité des Sciences et de l'Industrie (Paris, 2021), Rencontres d'Arles (Arles, 2022) or K11 Art Museum (Hong Kong, 2022). Their works are present in many private collections. They live and work in Paris. 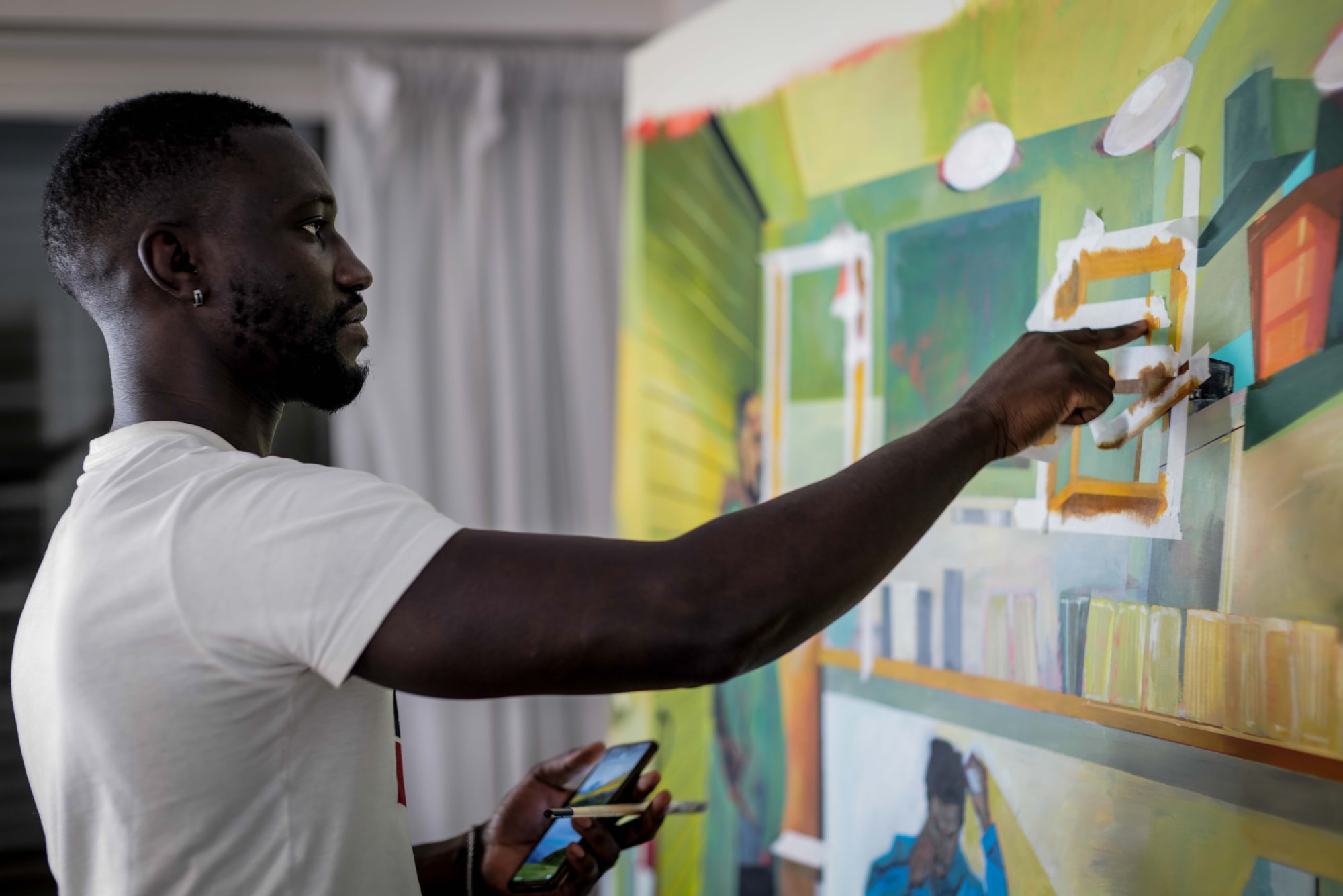 "I learned drawing because I love to tell stories," says Rakajoo. All at once painter, animation designer and boxing champion, this multifaceted artist creates acrylic and oil paintings in which he likes to tell stories, or lives. He captures the identities of his models to better render them in his paintings. His characters are inspired by people he meets, that are close to him or that he used to know, from his mother to a police officer present during the 2005 riots in France, to former robbers, sometimes interviewing his models to complement his works with audio tapes.
Rakajoo plays with perspective to better capture the gaze of the viewer. Sometimes he makes allusions to artists he admires and who have influenced his thinking, like Vermeer or Whistler. He introduces variations that combine the codes of comics and animation movies with his pictorial practice to create a world endowed with its own "graphic coherence".
In some of his works, a character wearing a highly recognizable tribal mask blends discreetly into the landscape or setting. For the artist, behind this enigmatic and anonymous figure is the "hidden side (...) which one struggles to fully acknowledge." A ghost that is both himself and the others, and a way of indirectly asking the question of his dual culture, a question he addresses to the viewers: What is it to be an artist from a diaspora in today's society? A question about finding your place in the world, at the very heart of overlapping perceptions.
Baye-Dam Cissé a.k.a. Rakajoo graduated from the Art & Image department of Kourtrajmé School, founded by director Ladj Ly and JR. It was after returning to his roots in the land of his origins that he decided to take on his pseudonym. Spotted for the first time in 2008 within his boxing club where he painted a mural, in December of the same year he participated in an exhibition on the theme of sport, at the request of the Jean-Luc Lagardère Foundation. Various group exhibitions followed, including one at the Palais de Tokyo in 2020, "Jusqu'ici tout va bien." In March 2021, he was invited to hold his first solo exhibition, Les Trois Châteaux, at Danysz gallery. He is also the grand prize winner of the Friends of the Palais de Tokyo 2022